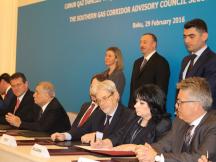 The realization of the Southern Gas Corridor will provide a diversification of sources and routes for supply of natural gas for European citizens. Considering the key steps on the implementation of the project in 2015, the representatives from the countries involved in the Southern Gas Corridor were adamant that their collective efforts to ensure energy security, to improve the interconnectivity and to provide access to alternative energy sources should also continue in 2016. This year’s meeting was attended by the Vice-President of the European Commission in charge of the Energy Union, Maroš Šefčovič, the Special Envoy of the United States on energy issues, Amos J. Hochstein, the High Representative of the EC in charge of Foreign Affairs, Federica Mogherini, representatives from Greece, Turkey, Albania, Italy, Georgia, Montenegro and others.

During the meeting of the Advisory Council for the construction of the Southern Gas Corridor, the Minister of Energy of Azerbaijan Mr. Natig Aliyev defined Bulgaria as a catalyst for Azeri natural gas to the European market. He thanked the Bulgarian Government for the support and the actions taken for the implementation of the project. The Vice-President of the European Commission Maroš Šefčovič stressed that the access of natural gas to Europe via the Southern Gas Corridor fulfills the principle adopted at the first meeting of the CESEC High level group, namely each EU Member State to have access to at least three different sources of gas.

Minister Petkova reminded the participants in the Second Ministerial Meeting of the Advisory Council for the construction of the Southern Gas Corridor that at the end of 2015 the shareholders of the project company "ICGB" signed the Final Investment Decision for the Interconnector Greece-Bulgaria. "The project has received positive decisions on environmental impact assessment in Bulgaria and in Greece and the expropriation procedures are on-going. Currently a Market test is being conducted which first phase should be finished by the end of March this year," Petkova pointed out. According to her, the result of the Market test will allow construction works on the interconnector to begin before the end of 2016. To this end a launch of calls for tender is under preparation. Energy Minister Petkova underlined that the interconnectors of Bulgaria with Greece and Turkey will enable natural gas from the Caspian region to reach the South East European region. She reassured the participants in the meeting that Bulgaria will continue to work for the successful implementation of the Southern Gas Corridor.

A joint declaration was signed after the Southern Gas Corridor Advisory Council, in which the interconnectors Greece-Bulgaria and Turkey-Bulgaria are enlisted as an integral part of the project infrastructure.