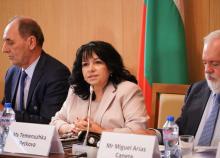 At the end of the Bulgarian Presidency of the Council of the EU, Sofia hosts the fifth Meeting of the High Level Group on Central and South-Eastern Europe Connectivity

CESEC initiative is an indisputable example of successful regional cooperation. I am pleased that within the framework of the Bulgarian Presidency of the of the Council of the EU, Sofia is hosting the fifth annual Meeting of the High Level Group on Central and South-Eastern Europe Connectivity, Energy Minister Temenuzka Petkova said. The Energy Minister is hosting the last energy event from the Presidency's calendar in Sofia.

Today, three years after the establishment of the CESEC initiative in Sofia, participants from Central and Southeast Europe reviewed the progress on projects in both, gas and electricity fields.

It is of particular importance for regional energy cooperation to build the missing infrastructure and improve security of energy supply, Minister Petkova stressed. The implementation of the interconnector projects: Greece-Bulgaria, Bulgarian-Serbia, the already built interconnector with Romania play a key role in providing the security of energy supply in the region.

At the forum in Sofia, symbolic ceremonies were held for the start of construction activities on the Romanian part of the project Bulgaria – Romania – Hungary – Austria (BRUA), as well as for the start of investments and construction of the interconnector Greece-Bulgaria. An illustration of the progress in building the interconnector Greece - Bulgaria were the signed relevant documents: exemption decision of the National Regulators from the access rules, a co-operation agreement with the Trans-Adriatic Pipeline, a memorandum of understanding between the Bulgarian Energy Holding and the European Investment Bank, preliminary interconnection agreements with Bulgartransgaz and with DESFA, and others.

Participants also reviewed the progress on projects in the field of electricity after the meeting last year in Bucharest was complemented by a joint approach on the electricity market, energy efficiency and the development of renewable energy. A symbolic ceremony marked a 30% increase in the transit capacity between Slovakia and Ukraine, as well as the reinforcement of Romania’s domestic grid in the region of Montenegro – Stalpu with funding under the Connecting Europe Facility.

Energy efficiency and RES, as elements of energy transition in the region, were also discussed during the forum. On a proposal from the EC, the Connecting Europe Facility will also include border projects for renewable energy.