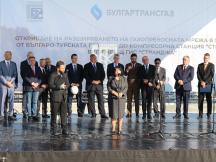 "We are witnessing the commissioning of the first stage of the project for expansion of the gas transmission infrastructure in the country along the Balkan Stream route – 11 kilometres from the Bulgarian-Turkish border to Strandzha gas compressor station. This is an extremely important project for both our country and the whole region and a real result of our active work to keep the strategic location of Bulgaria on the Europe's gas map", Energy Minister Temenuzhka Petkova said, taking part in the opening of the first 11 kilometres of gas infrastructure from the Balkan Stream route. The project includes a newly built transmission pipeline and a gas metering station Strandzha. The official opening was also attended by Prime Minister Boyko Borissov, Deputy Prime Minister Tomislav Donchev, Deputy Energy Minister of Saudi Arabia Aabed Abdullah al-Saadoun, the Ambassador of the Russian Federation to Bulgaria Anatoly Makarov, the State Secretary for Information and the International Representation of Hungary Tamás Menczer, local government representatives, members of Parliament and others.

According to Minister Petkova, the project is key to the implementation of our concept to create "Balkan" gas hub. It will allow diversification of natural gas supply sources and routes and will increase energy security in the region, Minister Petkova pointed out.

"With the implementation of these projects, we provide the Bulgarian economy with the opportunity to increase its competitiveness by using cheap raw material and our neighbouring countries will also benefit from competitive supplies," Prime Minister Boyko Borissov said before the ceremony. He underlined the key role of our country as a major gas hub that will be of benefit to neighbouring countries in the region as well. "The geostrategic location of Bulgaria provides long-term advantages for the country. By constructing gas infrastructure we create conditions for future generations to benefit from these advantages," Borissov stated.