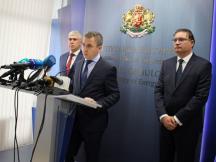 “The consumption of natural gas in Bulgaria is guaranteed at least a month ahead and no limitation of consumption is required at this time,” Energy Minister Alexander Nikolov told journalists regarding the announcement that Gazprom exports haа stopped supplies to the country. Minister Nikolov explained that a letter with such a warning was received by the Russian supplier on 26 April. Bulgargaz EAD has fulfilled all the requirements under the current contract, including making advance payments in accordance with the contract provisions. Thus the non-fulfilment of the contractual commitments is on the part of the supplier – Gazprom Export – with all the resulting consequences, the Energy Minister underlined.

Minister Nikolov reiterated that payments should be made in US dollars as regulated under the contract. The Russian party's request for the use of roubles for payment of natural gas supplies is in breach of the contract and poses risks to the buyer. “With the proposed two-step procedure, we would lose control of payments. There is no clarity on how the exchange rate will be used. The Bulgarian side is thus at risk of paying for the gas without actually receiving it,” the minister stressed.

“It is obvious that, in the current situation of war in Ukraine, Russia uses natural gas as a political and economic weapon,” Minister Nikolov underscored and underlined again the firm opinion that Bulgaria will not negotiate under pressure.

Bulgaria is in constant communication with the European Commission, where possibilities for common supply at EU level are being discussed, was explained at the briefing. The Bulgarian Energy Holding, Bulgargaz and Bulgartransgaz have secured the continuity of alternative supplies. “Our country is a loyal partner under the existing contracts and we will not jeopardize deliveries to our neighbours,” the Energy Minister stressed as well.