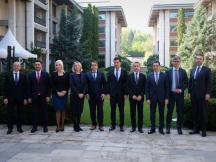 There should be no borders between countries when we talk about different gas corridors in the region. Let us sit together and set an example, because united we are stronger. Let us put aside the differences and look for common structural solutions for real synergies in the sector.

We don't have time; winter is not far away. This was stated by the Minister of Energy Alexander Nikolov at the opening of the regional Ministerial Meeting in Sofia, dedicated to cooperation in the field of energy security, diversification and green transition. He hosted the event attended by Prime Minister Kiril Petkov, Deputy Prime Minister Assen Vassilev, Director General of DG Energy of the European Commission, Ditte Juul Jørgensen, energy ministers and representatives of the sector in the region.

They discussed the most pressing challenges in the industry, in the context of crises, as well as the future development of regional electricity markets, security of gas supply, decarbonization and European green policy. The participants agreed on the need for solidarity to diversify energy sources for Southeast Europe. To these ambitious goals, Southeast Europe can play a key role in providing reliability of the systems and transformation towards a low carbon economy. The experts expressed hope that governments in the region will undertake as a follow-up to the forum, working discussions with each other and with the European Commission, the Energy Community Secretariat and other partners to effectively implement the energy transition.

A regional working group was set up during the event as part of the EU platform for joint purchase of energy resources.

We discussed medium-term and long-term measures to overcome the problems, Minister Nikolov later told the media. In the long run, the working group on the establishment of a common European energy platform for joint purchase of natural gas will present all possible scenarios at the level of infrastructure and for purchase of energy resources, it became clear in his statement.

The conference included the signing of important documents that reflect the readiness of the participating countries for effective partnership.

A public procurement contract was signed for investment design - working design phase, procurement of the necessary materials and equipment, construction and commissioning of the gas interconnector Bulgaria-Serbia (IBS) on Bulgarian territory. The interconnector is a key project for realizing the concept of construction of a gas hub in Bulgaria and is among the priorities for ensuring the country's energy security, diversification of sources and routes of supply of blue fuel, liberalization of the energy market and consumer protection. With the consent of the European Commission, Bulgartransgaz EAD has been appointed project promoter and future interconnector operator.

A Memorandum of Understanding was also signed for long-term energy storage between Bulgarian Energy Holding EAD and Stone & Webster LLC (subsidiary of Westinghouse Electric Company LLC). The agreement provides for co-operation to install two pumping systems for sustainable heat storage, providing 2 GWh. They will increase the resilience of the electricity network and support the country's renewable energy production with the potential to offset up to 0.7 million metric tons of carbon dioxide emissions per year.

Two declarations at ministerial level of important regional importance were also signed - in support of the BG-GR Cross-ReGen and BG-RO Cross-ReGen projects. They will encourage Bulgaria's bilateral cooperation with Greece and Romania, respectively, for the effective use of RES potential in border areas.