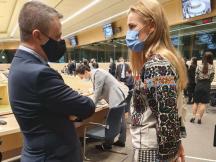 “Bulgaria is very concerned about what is happening in Ukraine. The gross violation of international law by the Russian Federation and the harm against territorial integrity through military intervention against Ukraine is totally unacceptable and strongly condemned. The Russian aggression creates additional risks to energy security in Europe against the backdrop of high energy prices”, Bulgarian Energy Minister Alexander Nikolov said, while he attended the extraordinary EU Council meeting “Transport, Telecommunications and Energy”, part Energy. The meeting is convened at the request of several Member States, including Bulgaria, and aims to discuss and identify measures against possible negative effects of Russian military aggression against Ukraine in the energy field.

Alexander Nikolov underlined that currently the Bulgarian energy system is functioning as usual, and added that our government stands ready to immediately activate and implement adequate measures in the event of partial or complete disruptions of gas supplies. The minister stressed the need to take immediate, decisive and coordinated action in the EU, with a focus on measures to ensure the sustainability of the energy system and the accessibility of energy for citizens and businesses, including by mobilizing a financial resource at European level to support national budgets. The close cooperation with Greece to accelerate energy connectivity in the region as part of the process of diversifying energy sources has been highlighted, including the reversible interconnection with Serbia. “It is important to continue with the rational implementation of the priorities of the European Green Deal, but the right of states to determine by themselves the most suitable energy solutions, including nuclear energy, should be fully respected,” Minister Nikolov underscored and concluded with Bulgaria's support for the accelerated integration of the Ukrainian electricity system into the European electricity system.

During the meeting, the EC presented to the Council its analysis of the current status of the security of oil and gas supply, as well as that of energy prices.

EU Commissioner Kadri Simson informed the ministers of the forecasts and simulations of various hypothetical disruptions scenarios, additional possible measures to alleviate the socio-economic consequences of the crisis in energy prices, and how to strengthen the sustainability and independence of the European energy system and prepare for the next winter period.