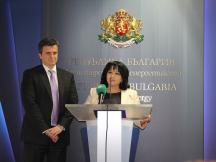 There are many challenges in the energy sector and serious work is to be done to build on the achieved in the past two years. Energy Minister Temenuzhka Petkova said to the journalists during the post acceptance ceremony from Nikolay Pavlov. She identified the finalization of the full liberalization of the electricity market and the natural gas market as one of the most important challenges in the sector.

According to her, the completion of the Belene Nuclear Power Plant issue in the best possible way for the society is also in the schedule. "When such a huge financial resource has been spent, we have to attain to the best solution", she added.

The next major priority of the Ministry of Energy is linked to the forthcoming decision of the European Commission on the proceedings against BEH, Bulgargaz and Bulgartransgaz.

Minister Petkova thanked her predecessor Nikolay Pavlov and pointed out that the achieved financial stabilization of the state-owned energy companies is evidence that the work over the last two years is a real reform of the energy sector.

In the opinion of Nikolay Pavlov, the efforts to ensure financial stability of companies in the sector have been his priority as caretaker Minister of Energy. "This will facilitate the work of Ms Petkova and her team", Nikolay Pavlov said.