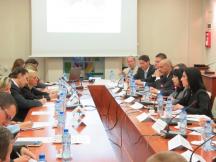 Special Envoy and Coordinator for International Energy Affairs at U.S. Department of State Amos J Hochstein and Bulgarian Minister of Energy Temenuzhka Petkova have discussed energy security in the region of South-Eastern Europe. According to Mr. Hochstein energy security can be provided through the diversification of routes and supplies of natural gas. "The role of Bulgaria is crucial for the region", he added.

Mister Hochstein congratulated Bulgaria for the progress made in the construction of interconnectors with its neighbor countries. In his view the prevalent tendency in the last months is that Bulgarian Government has actively been working for ensuring energy security not only in Bulgaria, but in the entire South-Eastern Europe. Minister Petkova in turn assured that energy security is a key priority for the Bulgarian Government. "Therefore we have focused our efforts in the implementation of these projects that will provide energy security in the region", she stated. Minister Petkova underlined that the construction of the interconnector with Greece is of highest importance. She specified that the discussions among the shareholders of "ICGB" to clarify all pending issues are ongoing. Temenuzhka Petkova informed about the development of the other interconnectors as well.

"Another enabler for the provision of energy security in Bulgaria is the local yield. We expect the tender procedure for exploration of Blocks Silistar and Teres to be finalized in the autumn" the Energy Minister noted. Minister Petkova and Special Envoy Hochstein agreed that the strategic importance of the interconnector Greece- Bulgaria arises not only from the opportunity to import Azeri gas, but also to deliver gas from the LNG terminals in Greece and other potential sources.

According to both interlocutors, the work of the Interdepartmental working group for  U.S.A.-Bulgaria Strategic Dialogue "Energy security" is a sound basis for the enhancement of bilateral cooperation.