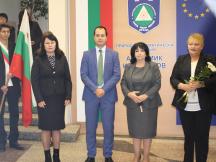 Municipality of Vratsa has introduced energy efficiency measures in five locations — High School of Natural Sciences and Mathematics "Akademik Ivan Tsenov", Secondary school "Nikola Voyvodov", Primary school "Ivan Vazov", kindergarten "Zvanche" and kindergarten "Detski sviat". The grant under the Financial Mechanism of the European Economic Area - BG04 "Energy efficiency and renewable energy" amounts to BGN 794 thousand. As a result of the execution of the project, the emissions of carbon dioxide will be reduced by 351,98 tonnes/year and there will be savings of the cost of electricity and diesel for preparation of the buildings amounting to BGN 40 379,80 per year. The project sites on the territory of the municipality of Vratsa are implemented in partnership with the Norwegian company Norsk Energy.

Energy Minister Temenuzhka Petkova and the Mayor of Vratsa Kalin Kamenov visited the renovated premises of High School of Natural Sciences and Mathematics "Akademik Ivan Tsenov". Dismantling and replacement of the old heating system, as well as of the substation, are executed. Minister Petkova underlined that the money saved could be used for other important school activities. According to her, all projects within the Municipality are carried out in a timely manner. Additional funds will be available for the implementation of measures to improve energy efficiency, the Minister also said.

It should be noted that in 2015, 34 grant contracts were signed with 32 municipalities for a total amount of BGN 20 419 775.06. Sofia Municipality and the Municipality of Madan are funded under two projects.

The funds granted will be used to improve energy efficiency and increase the share of energy from renewable sources for heating in public buildings.

17 out of the funded 34 projects are carried out in cooperation with the Norwegian partners of the donors.

Under the project measures for improvement of energy efficiency are implemented in over 100 buildings, of which 37 schools, 41 kindergartens, 8 hospitals and other buildings with social importance.