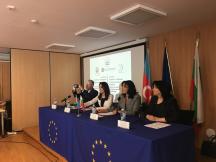 "The 25-year diplomatic relations between Bulgaria and Azerbaijan have evolved in all areas of mutual interest and have reached the level of strategic partnership. We will continue working to strengthen the economic cooperation and our focus is on the energy sector". Energy Minister Temenuzhka Petkova said at the opening of the conference organized by the Embassy of Azerbaijan in Bulgaria, the Diplomatic Institute and the Atlantic Club of Bulgaria to mark the 25th anniversary of the establishment of diplomatic relations between the two countries.

By following the priorities of the European Union, it is important for Bulgaria to ensure the security of energy supplies and their diversification in the region. For this endeavour Azerbaijan is a partner we can completely count on, Minister Petkova stated. "We support the development of the Southern Gas Corridor, a project driven by our partners from Azerbaijan. Integral parts of this project are the interconnectors of Bulgaria with Greece and Turkey", she also added. According to her, two and a half years ago the project for the construction of the interconnector Greece-Bulgaria was at a worrying stage, but now the project is being developed excellently. We recall that the Final Investment Decision for the implementation of the project was taken at the end of 2015, a market test was successfully conducted in 2016 and EUR 45 million was made available for its realization. In addition, the amount of EUR 110 million has been set in the state budget for the implementation of the project. Minister Petkova informed that a public procurement procedure for selecting the builder to construct the interconnector Greece-Bulgaria is forthcoming. Construction works are expected to begin in the first quarter of 2018.