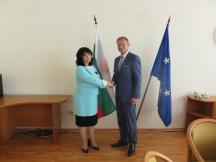 Bulgarian Energy Minister Temenuzhka Petkova and the Minister of Economy of Slovakia Vázil Hudak had talks about the political support of the two countries for "Eastring" project and next steps for its implementation. "A priority of Bulgarian Government is to guarantee energy security and to provide diversification of gas supplies", Minister Petkova underlined. According to Bulgarian Energy Minister, a proof of the importance of the project is the fact that it has been included in the ten-year development plan of ENTSOG (European Network of Transmission System Operators for Gas).

In Minister Hudak’s opinion, Eastring project proposes not only diversification of gas supplies, but also possibility for Bulgaria to make economic profit from transit fees of natural gas.

Both ministers came to the agreement that it is necessary to form a working group including representatives of the ministries and of the participant transmission operator companies in order to specify and work out the technical details of the project. The first meeting of this working group is to be held probably in Bratislava in September 2015. A Memorandum of Understanding will be signed by the countries involved in the Eastring project so that to express support at political level.

Eastring is a project to connect the existing gas infrastructure in Slovakia, Hungary, Romania and Bulgaria. This is expected to provide a potential for exchange of gas between Central and Southeastern Europe. Thus, the project will contribute to the enhancement of the security of supply and diversification of sources of natural gas.

The parties included in the Eastring project signed a Joint declaration to promote gas interconnectivity in the respective countries in Riga on 21st May 2015.