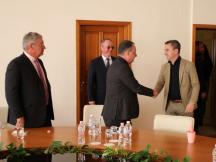 Energy Minister Alexander Nikolov discussed the country's investment prospects with the President and Chief Executive Officer of ContourGlobal AD Joseph Brandt. Mr. Krassimir Nenov, Executive Director of ContourGlobal Maritsa East 3 Thermal Power Plant also took part in the talk. The need for energy transformation in line with the challenges of the European Green Deal and, in parallel, the possibilities of increasing energy security and independence in the context of military action in Ukraine were at the heart of the discussion. Both sides agreed that, in the current situation without own energy resource, such as lignite, the security of the energy system in Bulgaria is practically impossible. Using this basic resource provides stability and predictability for the electricity market in both our country and throughout the region, as Bulgaria is a net exporter of electricity.

Minister Nikolov assured his guests that a large proportion of the funds in support of energy transformation, which our country is due to receive, will be allocated to Stara Zagora. The region offers rich opportunities for investment and modern industrial development and we welcome investments in Bulgaria of companies of the ranking of ContourGlobal, Minister Nikolov said. In his words, every project that will support diversification and energy security in the country is welcome. Carbon capture prospects, RES development and hydrogen infrastructure were part of the highlighted energy transformation prospects for the Maritsa East complex.