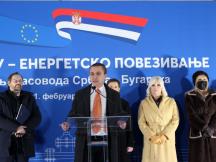 I expect by October 2023 at the latest, the gas interconnector Bulgaria – Serbia to be completed and help expand our country's access opportunities to the European gas market. The interconnector will enable Serbia and other countries from the region to access various sources of gas through the Southern Gas Corridor and the LNG terminal near Alexandroupolis, said Energy Minister Alexander Nikolov during the inauguration ceremony for the start of construction of the Serbian section of the gas interconnector Bulgaria – Serbia, which took place near the Bulgarian-Serbian border. The event, which took place under the patronage of the Prime Minister of the Republic of Serbia, Ms Ana Brnabić, was also attended by the Deputy Prime Minister and Minister of Mining and Energy of our western neighbor Ms Zorana Mihajlović, the executive director of Bulgartransgaz EAD Mr. Vladimir Malinov, as well as the Bulgarian Ambassador to Serbia Mr. Petko Doykov.

Minister Nikolov highlighted the benefits for consumers from changing the gas map with the construction of interconnectors, such as the one with Serbia that will provide the region with alternative sources of natural gas, which facilitates negotiations with potential partners, Minister Nikolov underlined. In his opinion, price reductions and security of supply are among the most important positive effects of interconnectivity in the region over a long period of time.

Minister Nikolov also stressed the role of natural gas in reducing carbon emissions in Southeast Europe, bearing in mind the challenges associated with the high share of coal in the energy mix of the countries of the region.

The current situation regarding the high volatility of energy prices requires targeted and effective measures where active cooperation and further integration of energy markets in the region will allow us to respond to the challenges. In this sense, the interconnector Bulgaria-Serbia project is an example of how sustainable cooperation between our two countries and the European Commission can deliver mutual benefits for both countries and the whole region as well, the Energy Minister concluded.

The pipeline is planned to be approximately 170 km long, from New Iskar, Republic of Bulgaria, to the town of Nis, the Republic of Serbia, of which about 62 km are located on Bulgarian territory.

The interconnector Bulgaria-Serbia is declared a Project of Common Interest for the EU and the Energy Community, and it is one of the seven priority projects under the Interconnectivity Initiative in Central and South Eastern Europe CESEC.