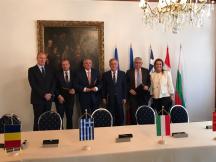 A Memorandum of Understanding on the realization of the Vertical Gas Corridor has been signed by representatives of the gas companies – Bulgartransgaz EAD (Bulgaria), ICGB AD (Bulgaria), DESFA S.A. (Greece), FGSZ LTD (Hungary) and SNTGN TRANSGAZ S.A. (Romania). The document has been signed within the joint meeting held today in Bucharest, Romania. We would like to remind that in September 2016 the energy ministries of Bulgaria, Greece, Romania and Hungary signed a Memorandum on the realization of the Vertical Gas Corridor within a meeting of the High Level Group on Central and South Eastern Europe Gas Connectivity (CESEC).

The aim of the document as adopted today is the cooperation between the gas companies for the realization of the corridor for bi-directional natural gas transport, interconnecting the networks of Bulgaria, Greece, Romania and Hungary. The promotion of projects of common interest as well as other required projects jointly and individually is among the objectives laid down in the Memorandum on the realization of the Vertical Gas Corridor. Considering the strategical importance of the project for the construction of the interconnection Greece – Bulgaria for the Vertical Gas Corridor the project company ICGB AD is also part of the initiative. The Parties agree that this Memorandum will serve as a basis to enhance the future cooperation on analyzing the possibility for the construction of the necessary gas transmission system in view of natural gas transport to transit countries and the European market from Greece through Bulgaria, Romania to Hungary and vice versa.

Considering the geographic location of all four countries, the improvement of their national infrastructures and the construction of the missing interconnections will contribute to achieve the objectives of the European energy union.