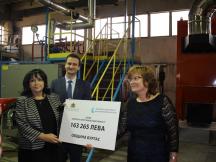 During a visit to Burgas, Energy Minister Temenuzhka Petkova inaugurated the symbolic launch of the work of the district heating in residential quarter "Meden Rudnik" by lighting the new boiler. This equipment is part of the renewed and modernized installation that will produce energy for two schools and one kindergarten: primary school "Elin Pelin", secondary school "Konstantin Petkanov" and kindergarten "Morska zvezda", in which over 3000 children are educated. The project is implemented according to Programme "Energy efficiency and renewable energy" under the Financial Mechanism of the European Economic Area 2009-2014. The partners of Burgas Municipality are "Technical University – Sofia - Technologies" EOOD and the company "NORSK ENERGY", Norway. The total amount allocated to the region of Burgas under the programme exceeds BGN 2.5 million.

Minister Petkova handed to the Deputy Mayor of the city Yordanka Benova-Ananieva a voucher worth of BGN 163 thousand. The funds are made available under the new scheme of the Norwegian programme. They will be used for the construction of energy efficient heating system in the buildings of primary school "Hristo Botev" and in the Burgas quarter "Vetren". It is envisaged to replace the current installation with an automatic biomass boiler, as well as to change the district heating network. This will reduce the cost of energy by 15 kWh/year.

It should be reminded that contracts awarding grants at total amount of BGN 20 419 775.06 were signed with 32 municipalities in 2015. The Municipality of Sofia and the Municipality of Madan are funded under two projects.

The funds will be used to improve energy efficiency and increase the share of energy from renewable sources for heating in public buildings. Out of 34 projects, 17 of the funded projects are implemented in cooperation with Norwegian partners of the donors. Measures to enhance energy efficiency are implemented under the projects in over 100 buildings, of which 37 schools, 41 kindergartens, 8 hospitals and other buildings with social importance.