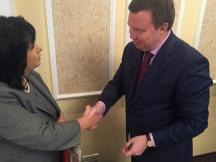 During the meeting Minister Petkova informed the Russian party on the adopted by the National Assembly on 28 September this year, Act on the provision of reimbursable financial assistancefor payment by the "National Electric Company" EAD of the liabilities related to the award by the International Court of Arbitration in Geneva on the Belene Project.  "The very next day the Ministry of Energy sent information to the European Commission in order to comply with the requirements of granting State aid. We have daily communication with the Commission and expect to receive their reply within two months" Petkova highlighted. As provided for in the adopted Act on the provision of reimbursable financial assistance, payments shall be made on the basis of the signed agreement between the two parties. In this regard, within the framework of today’s meeting, the lawyers representing the two sides have started discussion on the terms of potential settlement.

Both sides reiterated the excellent cooperation in the life extension of the two Units of NPP "Kozloduy". By the end of October the works on the extension of the lifetime of Unit 5 of the nuclear plant are to be completed, whereas the activities on Unit 6 are progressing according to schedule.